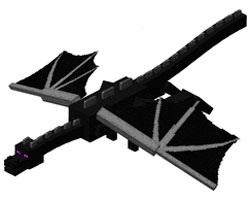 The Ender Dragon is an hostile dragon which lives in The End Dimension. It is the first end boss that first appeared in the game. This creature is a dragon with wings and long tail. Its body is black, but parts of its limbs are grey. Its eyes are purple. It has two horns at the top of its head and scales along its body. When you defeat Ender Draon it appears a new portal which will allow you to get in new zones of The End Dimension, where you will find cities called End City.

It is a flying creature that will attack any player who is in its territory. It has a long life and a dangerous attack. Even more it is very complicated to hit because is an enemy that flies fast. Moreover, it has the ability to restore its health due to a cristals that there are upon obsidian towers placed around its territory.

The Ender Dragon will only spawn in The End Dimension, when a player appears into its territory. Once eliminated the dragon you can invoke it again, by putting 4 Ender Crystals at the portal you will find in the center of its territory.